The technique of baking new oak casks before brewing alcohol is a traditional method, but the way to use it to enhance flavor as brewing wine is becoming increasingly creative and new.

It can be said that maturing in a new, well-baked oak barrel is a unique feature of Bourbon, and the process of maturation in old wine barrels of Bourbon is a typical feature of whiskey production. malt. However, more and more malt whiskey distillation factories are also using newly baked oak barrels to brew the wine. It is this that creates new and unique things that make us want to explore. Why must Bourbon be aged in a well-baked oak crate? And which elements influence the taste of Bourbon? And why does malt whiskey have to grow in old Bourbon boxes? This article will help you understand the above questions.

The technique of burning wood barrel grill is really not simple, to create charcoal layer inside oak barrels, it requires burning with a large fire, and burning for a specified time depending on the level of coal layer. manufacturer needs. There are 4 different levels divided from one to four. The first level needs to burn about 20 seconds of fire, the second is 25-30 seconds, the third is 35-40 seconds and the fourth takes 40 seconds to a minute. However, this calibration time may vary depending on the specific requirements of the Distillation houses, but the principle is the same. Burning for longer will create a thick layer of coal, usually about 2 mm for the first grade, and up to 4mm thick for the fourth level. Besides, the intense heat of the coal layer also creates a layer of baked oak lying on the coal layer. Thick or thin layer of coal depends on the time of burning and baking, sometimes up to 12mm thick (25mm thick wood). The flavor formed from this burnt coal layer is usually the smell of caramel and crumbles into smaller groups forming many other rich flavors. 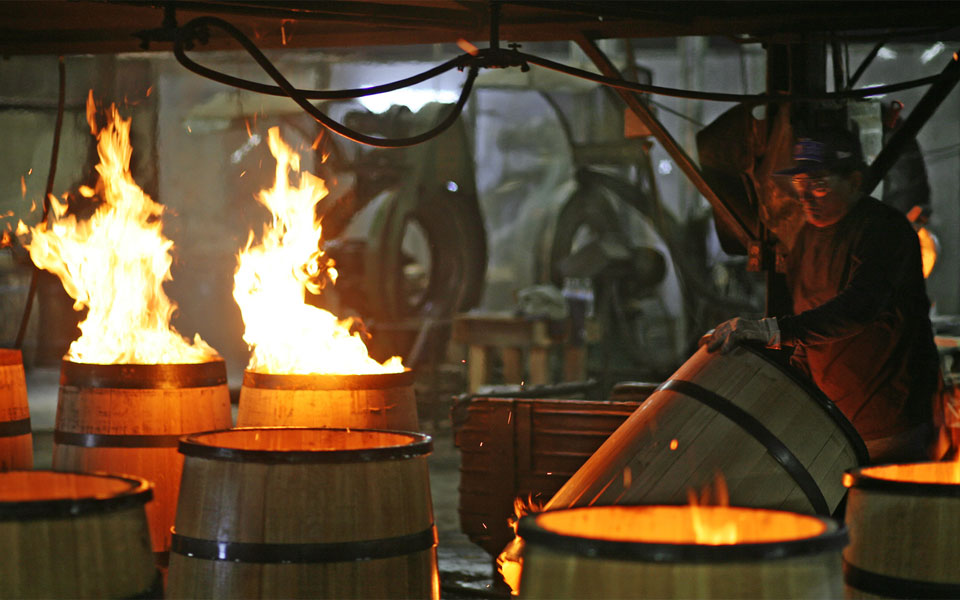 The common burning coal level for a Bourbon barrel is a level three and four. The thicker layer of coal will break into small pieces, creating favorable conditions for the alcohol to contact enough with the grilled coal layer and gradually blend into each other to mature. The charcoal and charcoal layers are separate but complementary flavors, while the charcoal layer removes certain impurities from the wine by absorbing them, while the baked wood blends and adds flavor to the wine. . And this is the whole process by which bourbon matures and creates flavor.

“In essence, the layer of coal is the filter that absorbs the acid and oil in corn, or it comes from the burnt wood layer. And the result is a sharper wine mixture, enough to boost and enhance the feeling of enjoyment.” This is the conclusion of the Master Distiller – Mr. Chris Morris, vice president of Woodford Reserve Distillation and Innovation Association.

In addition, the coal layer also absorbs the sulfur compounds generated when grinding malt. However, this is not cause for concern because this material is used very rarely when producing bourbon. In contrast, malt whiskey is completely distilled from malt, so the concentration of sulfur will be much higher. The sulfur will create a very strong vegetable flavor, the smell of meat, the smell of socks and the burning match. The lower sulfur concentration will taste the fruit and the sweetness.

“The difference between brewing in an old Bourbon barrel and a well-baked oak barrel is the concentration of the wine, not the flavor sequence that is made when brewed. A well-burned oak barrel creates a chain. the flavor is strong with vanilla ice cream, honey, a lot of coconut and clove are very clear, ”said Brendan McCarron, Glenmorangie distill director and warehouse manager. oak vats in flavor are also related to the style and direction of the manufacturer, such as the Glenmorangie house, which is more of a delicate flavor and without peat, whereas the Ardbeg family has a strong coal and rich aroma. .

“Glenmorangie really has a lot of the impact of newly burnt Sherry casks, and it only takes a few years for you to smell a lot of vanilla and coconut. And Ardbeg will take longer to see the impact of the wooden crate, it takes about six to seven years before we realize the smell of panna cotta cake. If we want to increase the sweetness for Ardbeg, then we have to add malt liquor brewed from the sherry barrel but still have a smoky flavor. The use of freshly baked oak casks to brew the wine will give a string of full and smooth flavors and a strong smoky flavor. There are boxes g

The technique of baking new oak casks before brewing alcohol is a traditional method, but the way to use it to enhance flavor as brewing wine is becoming increasingly creative and new. It can be said that maturing in a new, well-baked oak barrel is a unique feature of Bourbon, and the process of maturation...

The technique of baking new oak casks before brewing wine is a traditional method, but the way to use it to enhance flavor as brewing wine is becoming increasingly creative and new. It can be said growing up in a wooden crate …

The technique of baking new oak casks before brewing wine is a traditional method, but the way to use it to enhance flavor as brewing wine is becoming increasingly creative and new. It can be said growing up in a wooden crate …